On December 12th  and 19th MatchPoint NYC hosted the 2nd annual QuickStart tournament. Boys and Girls competed on separate days.  NY Tennis Magazine attended the boys tournament and wrote an article about the events of that day.

In the Beginner division, Joseph Belenky beat Alex Koval 11-7 in one semifinal, while Ivan Televnyy outlasted Chris Dubovici 14-12. Belenky carried his momentum into the finals as he defeated Televnyy 8-6 to win the tournament.

“It was really fun,” said Belenky. “I was so excited to win.”

“It’s nice to see how different it is from practice when we play matches,” said MatchPoint’s Assistant Director of QuickStart Danny Ostrometsky. “The match play is important because you can see how they deal with the nerves. I think the results were somewhat expected for some of them and overall it was really good quality of play.” 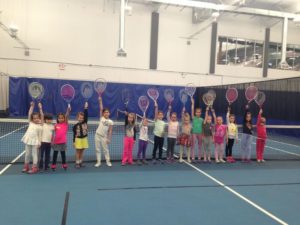 Our QuickStart tournaments show the parents what the kids have learned and that’s encouraging for a child. It’s one thing to achieve something, but we love to see that they are just excited to play.

If you are interested in Tennis Lessons, our Session 2 starts on January 25th, visit us at MatchPoint NYC for the latest QuickStart schedule.

If you are in town sign up for camp Dec 28-Dec 31st and FIND YOUR GAME!

CLASSES & PROGRAMS
ABOUT US